In Search of Better Leaders - Exploring a Unique Model
SHARE

“Student government lotteries are clearly fairer and more inclusive than the student elections that take place in pretty much every school, so we have faith that they will soon start to catch on.”  — Adam Cronkright

Democratic innovation is a passion for Adam Cronkright because he believes “the dominant conception of leadership is deeply flawed.” What if leadership and civic skills could be developed in everyone versus just a few “natural-born” leaders? Does making civic and leadership education available to all students help create a better world?

Cronkright co-founded Democracy In Practice in 2013 and has concentrated on reinventing the student government systems in schools located in Bolivia. What makes his model unique is that student government lotteries replace student elections. His organization is part of a growing movement of democratic innovation that is challenging traditional approaches to governance all around the world.

“You have to be able to listen to others, consider their perspectives and offer your own, as well as think critically about ways to solve common problems.”  — Adam Cronkright

Adam why was student government the best place to start?

Governance is our focus start because formal leadership is deeply tied to it. Student government struck us as the best place to start for a variety of reasons. First, when trying to change deeply entrenched societal views, the best place to focus is in schools working with the younger generations. Second, it is far easier to reshape and reinvent a student government than a municipal or state government, since you do not undermine entrenched political power. Third, the low-stakes environment of student government means that you can try out some creative and radical ideas and if things don’t go as you expected, it’s just a fun learning experience for everyone instead of a failed state!

Let’s talk about what makes your model unique?

First and foremost, what makes our model unique is the lottery. Most schools around the world have a student government that mimics traditional adult politics. And while this is supposed to teach students about democracy, it also excludes all but the most popular students from entering student government and developing leadership skills. The lottery makes the student government more diverse and representative of the student body. The other two aspects that make our model unique are rotation horizontal teamwork and the removal of a traditional hierarchical structure. Rotation horizontal teamwork limits the model term lengths to 3 months or a semester, rather than the traditional full-year terms of office. This enables more students to directly participate within the limited time. The removal of the traditional hierarchical structure means we no longer rely on designated roles such as president, vice president etc,, as these center the majority of the responsibilities on only one or two members of the student government. “You also have to act and carry yourself with integrity, communicate honestly, do the things you say you’re going to do, treat others with respect, and recognize when you need to improve.”  — Adam Cronkright

Distrust in Leadership is a global challenge. How does your approach restore faith and offer better solutions?

I think distrust in leadership is a global challenge for 3 main reasons. First, electoral politics tends to attract ambitious people who seek power and influence for themselves, rather than people who approach leadership as service. Second, we tend to concentrate power in the hands of these individuals and provide limited oversight to their power. Third, even when leadership tries to operate with wisdom and integrity, the fact that few of us have ever had the opportunity to experience the challenges of leadership firsthand makes it easier for us to distrust them unfairly. We’re the first group to use lotteries to form student governments, but we are not the first to use lotteries to form governments. Over 2000 years ago, the ancient Athenians used lotteries to fill most public offices and legislative bodies with groups of everyday citizens. This randomly selected and rotated approach to politics was referred to by Aristotle as “governing and being governed in turn.” This approach is incredibly scalable. One of the main advantages of civic lotteries is that they can be done using stratified sampling techniques, to ensure that the final group looks demographically similar to the larger population.

Can anyone become a strong leader? What are the critical skills we need to have?

It depends on the context, but in a student government, it starts with showing up. You have to be able to listen to others, consider their perspectives and offer your own, as well as think critically about ways to solve common problems. You have to be able to motivate your group to take action when needed, and that could be with an inspiring speech, or asking the question “OK, so what are we going to do about this problem?” You also have to act and carry yourself with integrity, communicate honestly, do the things you say you’re going to do, treat others with respect, and recognize when you need to improve. We believe that everyone can develop leadership skills and step up and demonstrate leadership in different ways and in different moments. How have you used new technologies in your model?

We have focused on really simple technology for administering student government lotteries and for operating things within the student government, because lotteries can be done in a million different ways and we want any school to be able to do this regardless of their level of access to technology. Technology will, however, play an important role as people start to apply these approaches to adult government, where the scale is much larger and the perception of corruption is much more likely.

What do you see as your most significant challenges moving forward?

Bringing this back to schools and educational settings, because that’s where we work, our most significant challenges moving forward are cracking the code of effective teacher involvement and spreading these ideas. Teacher involvement has been tricky for two reasons. First, student government is not prioritized. Lotteries are quick and easy to administer, but the success of the student government depends mostly on what happens after the lottery. Second, even when there are teachers who want to support the student government, the traditional classroom power dynamic between teachers and students often encroaches on student government, where students are supposed to have authority and take the lead, and teachers are simply supposes to support and advise. However, student government lotteries are clearly fairer and more inclusive than the student elections that take place in pretty much every school, so we have faith that they will soon start to catch on. 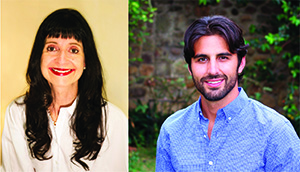